Fun Facts About All Kinds of Stuff! 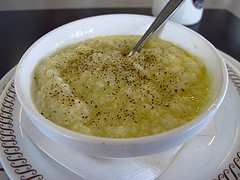 “The North has Cream of Wheat, the South has grits.” Saw this quote on my latest internet meandering. Check out more Souhernisms here.   I LOVE it–and it’s true! Now, speaking of grits, this reminds me of an episode of Perry Mason that I watched as a kid. I don’t remember much about the episode except the fact that the witness that was testifying estimate that he had seen the defendant in the victim’s house for a certain period of time. This happened to be while the witness was fixing–yes, fixing, his morning grits. Mr. Mason asked if he was sure that it was not a lesser period of time, perhaps sir your grits were instant grits? And the witness answered, indignantly, of course, that no true Southerner would ever own up to eating instant grits! I laughed then and laugh even now anytime I think of that line.

So, today’s facts are about, you guess it, grits. Here they are:

P.S. My second favorite grits quote is by Flo the Yellow Rose of Texas:’Mel, Kiss My Grits”. This was from “Alice”, one of my favorite 1970’s sitcoms!

This entry was posted on September 17, 2014 by onecoolchica in Food and tagged food, grits, southern food.

These Blogs Are Awesome!

Welcome to your new home on WordPress.com

When race is more than just black or white.

What if you spent every day looking for One Beautiful Thing?

Go out and see the world

To Love, Sex and Self Confidence